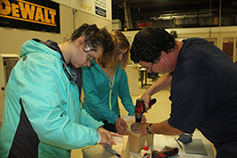 CALAIS _ Two Washington Academy students were a study in concentration Friday as they constructed bird houses during the Totally Trades Conference held at the Washington County Community College.  Connie Carver and Kaylee Brown, both 17, worked on their bird houses individually and as a team as they drilled holes, glued wood pieces together and used a power screwdriver to put in screws.   The Totally Trades Conference is a day-long event designed to encourage females to consider careers in fields traditionally dominated by males.

When the young women arrived at the college they were given the opportunity to sign up for two workshops. In addition to the Building Trades workshop, other workshops included black smithing, electrical, automotive, rock climbing, culinary arts, heavy equipment operation, cable technician, firefighting/EMT, computer repair, Do’s and Don’ts of Self Employment and Criminal Justice.

Trooper Kim Sawyer of the Maine State Police, along with law enforcement officers from U.S. Customs and Border Patrol and the Sheriff’s Department talked about the importance of a career in Criminal Justice. “This profession is important because there are not a lot of women in it so it is probably good to let them learn all they can about it,” Sawyer said.

While several young women trooped off to the Criminal Justice workshop, Carver and Brown chose making a bird house for their first workshop. Building Trades Instructor Richard Ramsey talked about the class exercise and after that the women, along with the other workshop participants, donned their safety glasses, and got to work.

They first drew a measurement line and then drilled holes in the wood. When it came to the part where more than two hands were needed, the women took turns helping each other hold the pieces in place while one or the other drilled the pilot holes. Soon, Carver and Brown were focused and all you could hear was the whirr of the power tools.

Carver said she liked to construct things. “I help my dad when he fixes something around the house,” she said.

Once they had finished, the two women admired their work. Brown said she planned to give her bird house to her mother when she got home.

Ramsey’s assistant Friday was Amber LaValle a former graduate of his program. “She came to my program saying ‘I don’t have any experience in carpentry, but I am willing to learn,’” he said. “She now is working at a local lumber yard and they have found her to be a valuable employee and she is really good in the trades.”

After lunch it was off to another workshop.

Sydney Neptune, 17, of Pleasant Point participated in the heavy equipment workshop. She had an opportunity to work with a simulator that allowed her to use a backhoe to dig a trench. It was all done under the watchful eye of Lynne Churchill, human resource manager for Sargent Corporation. “We are an earthwork construction company, we don’t do any building we just move the earth and we helped United Technology Center set up a program to teach young people about how to operate equipment so they have these simulators,” she said.

Although Neptune said she found the workshop to be “awesome,” her goal is to enroll someday in the college’s Automotive Program. “I am thinking about it,” she said about attending WCCC.

The day-long event began with opening remarks by Marianne Moore, business owner and mayor of Calais. She talked about starting out as a secretary at a telephone company in Texas. But her desire to succeed spurred her to take on positions within the company that in the past had been handled solely by men. She urged the young women to be passionate about their job or careers, ask questions and not be afraid to try. “Show your determination, like I did, and you too can be successful at anything you want to do,” she said.