skip to main content
About WCCC
Explore
News & Info
Home > About WCCC > News & Info > Campus News > Over $35,000 in Scholarships Given to WCCC Students 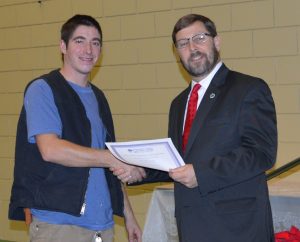 Skyler Cole of Calais receives a scholarship from Dr. Hoops, D.D.S. from the 2016 WCCC Golf Tournament.

Dozens of students at Washington County Community College were honored on Thursday, December 1st when they were named as recipients of scholarships based on merit and need at the college’s annual holiday awards banquet. This year, over $35,000 was given to students to assist them in offsetting the costs and associated expenses of being a student.

“Our goal is to give those students who have earned it and who need it a leg up in the second semester,” President Joseph Cassidy said during the banquet. Cassidy said that there were a large number of students applying for the scholarships this year, in part due to awareness outreach by financial aid director Linda Winchester.

The banquet was catered by Divots (based at the St. Croix Country Club in Calais) and featured spaghetti with meat and vegetarian sauces and generous desserts that were popular with many of the attendees. The event was held in the gym, which was seasonally decorated and musically graced by classic holiday songs for the occasion.

Notable to this year’s festivities was the large number of children present. Family members are always welcomed and encouraged to attend awards banquets at WCCC, and many do—this year, however, there were children of all ages accompanying their loved ones during their special night. Recently launched programs at the college such as Family Futures Downeast have been emphasizing the importance of two-generation involvement in the college education process, an emphasis that carries over into all aspects—particularly celebrating successes.

The next awards banquet at the college will be held in the spring.