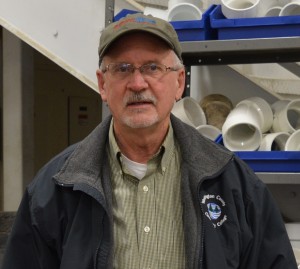 The transformation from student to teacher is one of the most profound and significant milestones an individual can undergo in the course of their development. Washington County Community College provides an ideal environment for that transition to occur, a fact that Allan Sutherland knows well.

Education was not Sutherland’s first priority. Having been raised in Eastport, he dropped out of Shead High School in his junior year to join the Marines. He was no slouch academically, however: He completed his GED while in Japan before his classmates got their diplomas from Shead.

A few years after returning from his service in the Marine Corps, Sutherland saw a notice in the paper advertising WCCC’s (then WCVTI) first plumbing and heating class. Since Sutherland’s father was a plumber, Sutherland was familiar with the trade, and he made the decision to enroll. He completed his degree in two years, graduating in 1976.

Two years later, Sutherland was asked to become a substitute teacher, and in 1981, he became the full-time plumbing and heating instructor. “Being a student at WCCC definitely motivated me to want to instruct there,” Sutherland said.

While becoming a teacher represents a graduation in itself from being a student, Sutherland exemplifies the fact that an individual is never done learning. During his time as a teacher at WCCC, he continued his education, earning his bachelor’s degree through the University of Maine.

Now, after 35 years, Sutherland estimates he has instructed more than 500 students in the trade of plumbing and heating. While Sutherland notes he has had many gifted students, he said there’s a certain kind of student that impacts him the most. “It’s always rewarding when you work with students that have struggled through the class only to see them working successfully in the trade a few years later.”

With his retirement date fast approaching, Sutherland already has a solid plan on where life will take him next. First and foremost will be a much needed vacation to Virginia Beach for three weeks, where he and his wife and dog will travel in their RV. Once they return, Sutherland aims to continue operating his antique shop on Water Street in Eastport each summer. He won’t be leaving the plumbing and heating trade entirely, however—he has taken on a new role as the code enforcement officer for Perry, and he will continue to serve as the plumbing inspector for several rural territories and towns.