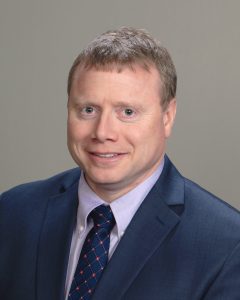 Sometimes, the path to the future we desire for ourselves is not a straight one, but instead it becomes filled with unexpected opportunities and challenges, each of which takes us into seemingly different directions. Such was the case for Joe Moses, who would spend seven years acquiring his associate’s degree at Washington County Community College – an experience that Moses now credits as being integral to his advancement to President of the Down East Credit Union and his ongoing pursuit of a doctoral degree.

Growing up in Calais, Moses began his employment career at Clark’s Variety Store, working for Eleanor Clark at the same time as working toward his high school diploma at Calais Middle High School. “She was like a mother to me, she was just fantastic,” Moses said, recalling with fondness his six years working with Eleanor. “But how much can you grow in a little variety store?” He made the decision to move on in 1993, finding a position working for Rick Crowe of the Princeton Food Group. Within a few years, he was promoted to Store Manager of the [Woodland Food Mart], a position he would hold for ten years.

Even though he was already working as a Store Manager, Moses knew he had a lot to learn. “I always wanted to go to college,” he recalls. He enrolled at WCCC in the Business Program in 2000 at the age of 27. His path would not be a direct one, however, as he struggled to balance the demands of work and family life at the same time. He took classes part time, gradually working through the curriculum when he was able to.

The same year he began his studies at WCCC, Moses was invited to participate on the board of Down East Credit Union, then called St. Croix Federal Credit Union. Moses performed the role for four years, demonstrating his character and commitment in doing so. Within a year of resigning from the board in 2004, Moses met with the credit union’s CEO, David Tozier, who offered him the position of Executive Vice President. “I was like, ‘Wow, what an opportunity!’ I’m going to make this work.” Moses agreed, and in 2005 he joined the company.

The new position was somewhat daunting to Moses, who had yet to complete his Associate’s degree. “Finance wasn’t my background. When I became the director of the credit union, I felt I was way out of my league.”

The expectations of being an executive vice president increased Moses’s desire to obtain his degree, even as he continued to find difficulty in fulfilling the requirements. “I’ve always had a hard time learning due to the study and time required,” Moses said. He recalls a pivotal moment when he met with Joe Cassidy – then a teacher in the Early Childhood Development program at WCCC. “He gave me a pep talk,” Moses said. “He wasn’t my teacher, but I remember that pep talk well.” While he opts to keep the details of the talk private, he was fine with sharing a summary of it: “Basically, we’re all struggling.”

Finally, in 2007, with the acquisition of his associate’s degree, Moses completed his goal of completing a college program. Not only had he completed it, but he had done so with honors. Elbow-deep in his role of executive leadership for a major local company, Moses soon resolved to continue his education. He enrolled in the business program at the University of Maine in Machias in 2009, finishing it in three years with high honors. In 2011, he took on the position of Chief Financial Officer at the credit union, and he committed to enrolling in a master’s program the following year. He completed his degree from American Public University in 2015 and enrolled in a doctorate program at California Southern University a year later. In 2017, he was named President of the Down East Credit Union.

The courses Moses is taking have contributed significantly to his work in senior leadership, he asserts. He has been able to apply his understanding of organizational behavior, business process reengineering and servant leadership to great effect, helping the credit union earn recognition as being one of the Best Places to Work in Maine in 2017.

“If it wasn’t for WCCC, and the influential people in my life, I don’t know where I’d be,” Moses said. He explained that while he would later go into online schooling, if he hadn’t have had the pep talk with now-President Cassidy, his progression in school might not have ever happened. “It was just the perfect timing.”