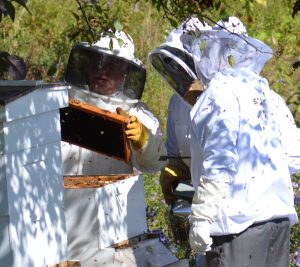 At the end of every summer, students from near and far come to live on the campus of Washington County Community College. This past year, however, the customary group of incoming students were joined by a group of new residents—this time of the flying, six-legged variety. Two hives of honey bees have been established on the campus, with their hives located under apple trees lining the edge of a small pond.

The hives were purchased by the school under the guidance of beekeeper and Business professor Bill Case, who donated the bees themselves. “I think it’s really good for a variety of reasons,” Case said. “We should be the stewards of the environment as well as the stewards of minds.”

The bees will provide pollination to the various fruit trees that can be seen throughout the campus, and when the recently-planted native fruit bushes begin to produce, the bees will be there to pollinate them as well. In the future, the college aims to offer vegetable gardening plots for community and student use, a goal that the bees will be an essential part of. At present, a third of all food in the world is pollinated through the efforts of bees.

In addition to their vital role as pollinators, having the bees on campus is an instructional opportunity as well as one that enables the college to openly demonstrate its support of contemporary global issues. Since the 1990s, bees have been dying off in large numbers due to Colony Collapse Disorder, which is presumed to be caused by a range of environmental and biological factors.

“By having it here it recognizes that we are also part of the global thought process,” Case said. “Students should get the view that it’s important to the environment and that the college is providing that function.”

The college may aim to offer basic or advanced beekeeping courses in the future as a result of the increasing interest in beekeeping locally. Every year, more and more community members sign up for the beekeeping courses offered at the University of Maine at Machias, which then grants them membership in the Washington County Beekeepers Association.

One of the best bonuses to keeping honey bees is the production of honey, and WCCC President Joe Cassidy said that he hopes to be able to offer locally produced honey in the near future. For now, though, the young hives will keep the honey to themselves as insurance for surviving the winter. A normal hive will go through 40 to 60 pounds of honey in any given winter.

Even with diligent care, there is only a 50-50 survival rate for bees in the northern climates. Once the temperature hits 40 degrees, the bees won’t leave the hive or take any nourishment from the supplied water and sugar syrup. Instead, they will be drawing their nourishment from their stored honey.

Contrary to popular belief, bees don’t hibernate. They form a cluster around the queen and make it warm in the hive by flexing their flight muscles. “It can be freezing outside and 70 degrees in the hive,” Case said. “We’ll winterize the hives and give them the best chance in this environment.”

While allergic individuals should remain wary, President Cassidy—himself an amateur beekeeper—said that students don’t need to fear being stung. “Bees don’t sting you unless you harass them. They’ve been good neighbors.”

Not only are the bees amicable and purposeful, they can provide a meaningful life example, too. “We can learn a lot from their collectivism,” Case said. “We’re just too stubborn as humans to do that.”