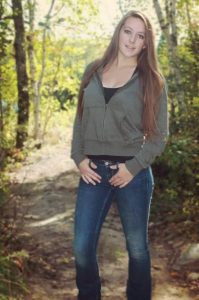 Every year, Washington County Community College picks one student who has demonstrated themselves to be outstanding, well-rounded, and who ultimately exemplifies the standards the college sets for its students. This year, that student is Jaycie MacArthur of the Business Management program – a student who remained dedicated to her studies even in the face of significant personal loss.

Born and raised in Princeton, MacArthur attended Woodland High School before attending WCCC. As a bright, personable young woman, MacArthur distinguished herself in high school by getting good grades and taking classes in Photoshop and digital photography to further her interest in the hobby. She graduated as an honor part and soon began to seriously consider what direction she wanted her academic career to continue in.

MacArthur’s fiancé, Curtis Allen, runs his own business as a contractor, and so it seemed like an obvious choice for MacArthur to pursue business management. She knew she could utilize what she learned to operate her photography business on the side – and so it was determined that WCCC was MacArthur’s destination of choice.

Despite being confident in high school, MacArthur remembers well her experience as she began her studies at WCCC. “I was really timid coming into college,” she recalls. “But [WCCC] is so friendly and the atmosphere is so easy to warm up to – it’s really enriched my confidence.” Just as she did in high school, MacArthur distinguished herself with good grades. In her first year, she was recognized for Outstanding Achievement in Business Management.

It was also in her first year that MacArthur was met with a potentially debilitating loss. Her father was diagnosed with inoperable, terminal cancer in February of 2016; he would pass away a month and a half later. Knowing that he didn’t have long to live, MacArthur struggled with being at home as well as with coming to school. “It was tough to be home, but I wanted to be home. It was tough to come to class. I really didn’t want to be at the college,” she said. “But people [at WCCC] gave me the support I needed to keep going.” In particular, MacArthur credits Linda Winchester, Mary-Ann Urquhart, Bill Case, and Rhonda French with giving her much-needed support during a very difficult chapter in her life.

As a student at the college, MacArthur became the student Financial Aid ambassador in her first year, working alongside Winchester in the Financial Aid office. She stayed on full-time through the summer and has gone from her initial experience with financial aid – having virtually no knowledge of it – to being able to fill out the required forms in less than 10 minutes. MacArthur was also recently inducted into the Phi Theta Kappa honor society.

While MacArthur will be graduating from the Business Management program in May, she intends to come back to WCCC in the fall to finish her general education courses before transferring to the University of Maine in Machias to complete her bachelor’s degree in business management. Once that’s done, MacArthur intends to open her photography business in the area.