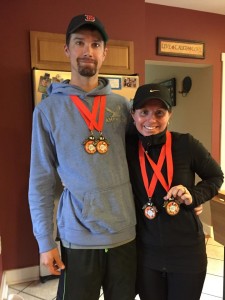 Randy & Heather White, a husband and wife team, participated in the 2015 WCCC Ghost Run. Both won 1st place in their division.

The second annual Ghost Run, a half-marathon sponsored by Washington County Community College, was a superb success—a feat that would not have been possible had it not been for the efforts of the volunteers involved. Three teams and twenty five individuals traveled the 13.1 mile route as it wound through the Moosehorn and parts of Calais.

“Without the volunteers, it couldn’t happen,” Chris Woodside said. Woodside is director of the Outdoor Adventure Center at WCCC and is one of the primary organizers of the run. Woodside elaborated that volunteers manned water stations along the path while Calais Fire and EMS had an ambulance on site monitoring the condition of runners and the Calais Police Department ensured safe crossings at the more risky intersections. “It’s an all-around team effort.”

Woodside said that the participation this year was equal to last year’s, despite the cancellation of seven pre-registrants due to unexpected injury and the threat of rain. Among those who cancelled were marathon enthusiasts Sarah Mulcahy and John Hough, though each lent a hand in laying out the course the day before.

A new record was set this year on the women’s side by WCCC’s own Molly McDonald, who finished the run in one hour and thirty nine minutes. “It was a great opportunity to get together with a nice community of people,” McDonald said. “It was a well-organized race due to the efforts of the organizers and the volunteers.” McDonald said that she expects to run the course again next year, body-permitting.

On the men’s side, the first to finish this year was Shane Brennan, coming in at one hour and thirty five minutes. Of the teams that participated, a team of Border Patrol officers won for the second year in a row—besting their time from last year by four minutes.

Each winner received a trophy for their accomplishment while McDonald and Brennan received three free credits from WCCC. McDonald and Brennan both chose to award their credits to a current student of WCCC. Additionally, funds raised from the event will go toward two separate $200 scholarships to be awarded to a WCCC student.

Woodside said that next year’s event is already being planned, and that the organizers are looking into registering it as part of a race series. To encourage more youth participation, Woodside said they may have a section designated for younger runners looking to run in their first official race. “Hopefully we’ll see our little race grow bigger than ever before.”