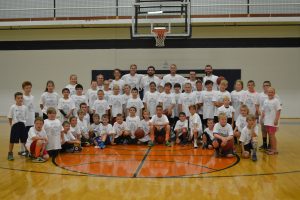 For three days at the beginning of August, youth from around the area were able to participate in an all-star basketball clinic conducted in part by employees of the Indiana Pacers Organization. The Chris Taylor and Company Basketball Clinic, which was hosted by Washington County Community College and held between the college gymnasium and that of nearby Calais High School, drew in 80 participants between grades 1-12.

“The ultimate goal with the clinic was to provide young players in the area with some different perspectives on the game that they otherwise might not hear,” shared Taylor, himself a CHS graduate. Players were encouraged to remember “FUNdamentals” and were taught drills that they can practice throughout the year.

Taylor, who now works as the Director of Basketball Operations at Fort Wayne Mad Ants and Founder and Chairman of The Blue Devil Fund Board was accompanied by three other CHS graduates: Logan Huckins, who has played at the collegiate level for the University of New England and Husson University, Madison McVicar, who now plays for the University of Maine and Chris Woodside, former coach of the Blue Devils and currently coaching at John Baptist High School and JMG Instructor, The team was joined by Hansen Wong, Director of Basketball Information and Technology for the Indiana Pacers, Olivia “City”” DiNucci, who has played for Emerson College and Boston College, Kabir Moss, who has also played for Emerson College, Dan “GAP” Bisaccio, an employee of Miami Heat, and Dru Anthrop, who has played for Purdue University and now works for the Pacers and the Orlando Magic. “I was fortunate to be able to gather a great group of friends that have experience either playing or working at every level of basketball that were excited to travel to Calais for a few days and share their wealth of basketball knowledge with the local youth,” said Taylor.

During the clinic, the coaches guided the young players through a steady series of drills while providing them with information about each facet of the game. “Aside from the always-popular shooting competitions, the players really enjoyed when we broke into stations – whether it was defense, footwork, shooting mechanics, or dribbling,” Taylor shared. “We challenged them to work hard, and they did that with a smile on their faces.”

This is the first time that a clinic has been hosted in the area by Taylor and his companions. The idea arose between Taylor and WCCC’s Coordinator of Student Involvement & Engagement Ben Collins. “Chris and I had discussed the lack of opportunity in the area, and we decided to work together on bringing another quality, affordable camp to the area,” said Collins. “There is interest, for sure, but not everyone is able to afford to send kids away to camp.”

The camp was a huge hit for the youth that attended it. “Many of the kids enjoyed the diversity of the coaches and what experiences they were able to bring to camp,” said Collins.

Taylor hopes to offer the camp again next year for those who are interested in participating. Collins said that the hope is to expand the number of youth who attend and to provide additional resources for campers.