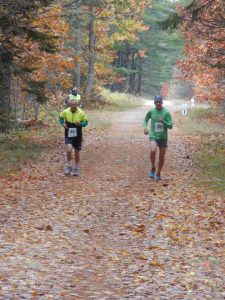 The third annual Ghost Run half-marathon, coordinated by Washington County Community College, saw record numbers of participants despite the chilly and wet weather on October 23rd. Almost 70 runners set out on a course that took them through Moosehorn National Wildlife Refuge, down Route 1, and along the Riverfront, raising over $600 for student scholarships.

Participation this year was boosted in part by the postponement of the Downeast Athletic Conference cross country championship, which enabled sixteen students from the elementary and high schools of Eastport and Narraguagus to compete as relay teams. Scott Fraser, Director of WCCC’s Outdoor Adventure Center and one of the coordinators of the race, said that their participation highlighted that “even elementary kids can be involved” due to the relay component of the half-marathon.

Each of the winners in the various age categories were also given a gift certificate to Crumbs in Calais for a free lunch. Crumbs also donated twenty goody bags that included “ghost cookies” and treats. Dunkin Donuts gift cards were gifted to participants in addition to locally grown pumpkins.

Participants described their experience at the Ghost Run with appreciative enthusiasm. One said that the course was “one of the most beautiful and fun courses I have run on” while another said that it was complemented by “great support”. Another runner, Gary Allen—the founder of the Mount Desert Island marathon—said that “this is what running used to be like.”

For the first time, non-perishable donations were accepted for the student food pantry at WCCC. Over 200 pounds of food were donated. Each runner that brought in a donation was able to enter a raffle for a random item. “People brought in so much food—hundreds of pounds of food. Bags and bags,” Fraser said, lauding the generous spirit of participants.

More than 30 volunteers helped to ensure there were no difficulties during the event. Fraser described the volunteers as the most important element of the race. “The race is only as good as the volunteers. If one person doesn’t do their job, then the whole thing falls apart.”

The race committee, which includes runners Sarah Mulcahy and John Hough, who assisted with the course design and setup, also wishes to thank Calais Fire-EMS and Police Department, Moosehorn Wildlife Refuge, the Calais Recreation Department, and all others that donated time and effort to the run.

“Looking forward, this race has the potential to be big,” Fraser said. “We want to keep it feeling nostalgic and retain the small town race feeling as much as possible.”