Rebekah Tolatovicz, Alumni of the Month 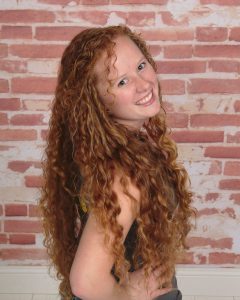 Before we are able to soar, sometimes we must climb. For one graduate of Washington County Community College, WCCC provided her with the confidence she needed to set her sights on the highest of heights. A 2015 graduate of the automotive technologies program, Rebekah Tolatovicz is now on her way to completing a degree in Aerospace Technology at Eastern Florida State College on Florida’s Space Coast.

“I’m going to work on what the astronauts will be riding in—spacecraft and satellites,” Tolatovicz explained. Organizations like NASA and companies such as Boeing, Northrup Grumman, and Blue Origin routinely hire graduates of the associate’s degree program Tolatovicz is now enrolled in. When she returns to school in the fall, she’ll be building a rocket, studying fiber optics, and launching CubeSats, miniature satellites that she refers to as “the future of satellites”.

It’s a far stretch for a homeschooled student from Dennysville that “never intended to go to college.” Raised in a rustic setting with a family that traps and produces its own furs, Tolatovicz gained an appreciation for working with her hands from an early age. Gifted with an encyclopedia of aircraft that she remembers studiously poring over, Tolatovicz would recreate the blueprints of her favorite designs.

“I planned to join the military at 17—the marines. I wanted to work on tanks and armored vehicles.” After realizing that her asthma would keep her from serving, she sought out the Civil Air Patrol. She was on her way to gaining her solo wings, but ran into complications with completing the program.

It was then that a friend’s father suggested that she accompany him to WCCC to meet Ron O’Brien, the automotive instructor. She gamely agreed, and after an enthusiastic interview, Tolatovicz soon became enrolled in classes. Her twin sister simultaneously enrolled in the Criminal Justice program.

Having never been in public school, the transition was not easy for Tolatovicz. “Looking back, a lot of it makes me cringe because I feel like I was a little bit of a different person,” she recalls. “It really helped me grow up. Everybody at WCCC was so nice and I was super awkward and kind of lame, but everyone was helpful and understanding.”

Tolatovicz excelled at WCCC, earning high marks in each of her classes. She remembers one instructor in particular for his teaching ability. “I hate math. But Travis’s class was the one time I enjoyed it,” she said,

referring to Instructor Travis Stepan. “He’s my favorite teacher that I’ve had at either school. He understands that math isn’t everybody’s strong point—that it doesn’t click with everybody the same way.”

After completing the certificate program at WCCC, Tolatovicz began to seek enrollment at EFSC. She emphasized that the classes she took at WCCC have given her an important foundation. “Even though it’s almost completely different—the lingo is different—the experience is relatable. It really helped.”

More than just imparting technical expertise, Tolatovicz said that the gift that WCCC really gave her was confidence. “I don’t think I would’ve gone away to school if I hadn’t come to WCCC first.” She said the environment of EFSC—home to upwards of 25,000 students across five campuses—is less intimate and friendly than the smaller community college.

With a bright future ahead of her, Tolatovicz is eager to work in various capacities throughout the aerospace industry for the rest of her life—possibly in other parts of the world. Though she admits it feels strange sometimes to be so far out of her home neighborhood and separated from her twin, now studying International Relations at Liberty University in Virginia, Tolatovicz radiates with the confidence of moving steadily forward on her chosen path.