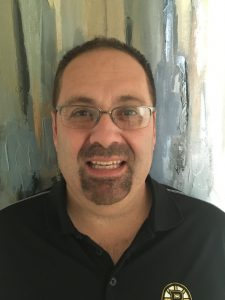 Wayne Jackson, Owner of Jackson Plumbing & Heating is the 2016 November Alumni of the Month.

There is a certainty shared by each of our lives: at one point or another, we will be faced with a challenge. Perhaps we will be asked to do something we’ve never done before, or to do something that makes us uncomfortable. How we respond to those challenges is up to us as individuals; for some of us, the process will be so unnerving that we dread any and all foreseeable challenges. For others, however, the very experience of being challenged becomes a welcome pleasure—particularly when they become viewed as opportunities for personal growth. That approach is what Wayne Jackson used when he came to Washington County Community College [WCCC] in 1982, and it is the same one that has guided his success ever since.

A graduate of Old Town High School, Jackson knew exactly why he wanted to come to WCCC (then the Washington County Vocational Technical Institute). “I wanted a job that was something different—one that gave me a new challenge every day,” Jackson recalled. “I knew I could get a certificate in plumbing and heating in two years at WCCC.”

The appeal of gaining sufficient certification to start his own business in that amount of time was irresistible to the young Jackson. He made the decision to enroll and spent the next two years living on campus as a Resident Advisor while taking classes. To earn extra money, he held a work study job cleaning the buildings and grounds. “I kept myself very busy,” Jackson said.

With no background in plumbing or heating, Jackson was pressed into absorbing a steady stream of unfamiliar material. Under the guidance of recently-retired instructor Alan Sutherland, Jackson readily learned each facet of the respective trades. “I got everything I needed from WCCC. I never looked back after that.”

Upon graduating, Jackson immediately began working to create his own business in the Old Town area. When he discovered that there were various expenses that he hadn’t foreseen, he took a job working as a teacher at United Technology Center in Bangor. Within four years’ time, he had everything in line to formally launch Jackson Plumbing and Heating.

With his sound work ethic, 24-hour service and an ongoing commitment to face-to-face customer service, Jackson’s business steadily grew. Soon, he hired five additional service technicians and an office manager to assist him, and he purchased several vehicles to build a reliable fleet. In 2012, the business opened in a dedicated location in Old Town.

In the meantime, Jackson has continued his work as a teacher, a role that he initially thought he would only hold for a few years. “I didn’t realize I wanted to be a teacher,” Jackson said. “Now I do it because I enjoy it.” His enjoyment clearly shows in his relationship with his students and his peers: in 2013, Jackson was named Advisor of the Year, a state award given annually to one instructor in the fields of Career and Technical Education.

Though he no longer spends his days directly solving plumbing and heating related problems, Jackson asserts that the task of managing his business while continuing to be an engaging and informed educator is exactly the kind of lifestyle he was looking for in his youth. “Every day is a new challenge—every moment is a new challenge,” Jackson said with a laugh. To meet that challenge, Jackson advocates being a lifelong learner. “It helps me stay current.”