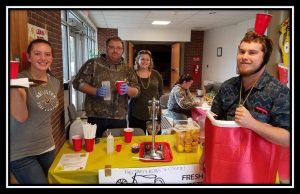 Three businesses held their grand opening at Washington County Community College on November 29th—each of them offering lemonade served in a novel fashion. While the businesses were only open for just over an hour, the experience gave the students of Rhonda French’s Entrepreneurship class the opportunity to plan, promote, and prepare their product to determine who could generate the most net profit.

Each of the three businesses was devised and staffed by between four and six students from various disciplines across the college. All of the businesses followed the same guidelines—lemonade had to be served, but it could be accompanied by additional perks. Each business was given the same start-up funds of $25. Prior to setting up their stands, the students were given the option of selecting where they would be located. They were then charged with creating marketing materials to generate publicity for their business. Each business opted to sell their lemonade for $1 each.

Perhaps the most visually arresting of the stands was Lemonicious, staffed by students from the Adventure Recreation program. True to their chosen discipline, the students opted for an adventurous tiki bar theme, handing out leis to all of their customers and passers-by. Customers had the option of having their lemonade served as a slushie, or they could opt to have a slushie made from an assortment of mixed fruit.

At the Lemonade Party, customers were tempted by homemade cookies and party beads to complement their lemonade, which was freshly squeezed on the spot. In addition, customers had the opportunity to toss a ball into a cup affixed to the head of one student (who was also wearing a large cup costume). Getting the ball into the cup generated tickets for a drawing, with the grand prize being the cup costume itself. Rather than fixing themselves in a single location, Lemonade Party deployed one student to travel the halls with a tray of lemonade and cookies to solicit customers.

Just down the hall at LemonMade, students offered their customers a bag of popcorn to go along with their lemonade—made with a traditional mixture of lemon juice and sugar. LemonMade offered two kinds of lemonade, one bitter and one sweet. Several different kinds of seasonings were available for the popcorn.

In the end, it was the Lemonade Party that won out with a net profit of $44.50. The students responsible—Jaycie MacArthur, Riley Ouelette, Terri Hayward, Karina Barnes, and Stephan Kollar—will be donating the proceeds to a charitable cause of their choice.