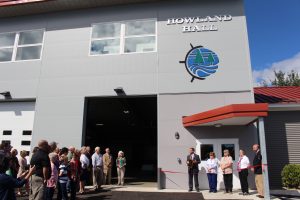 Since its inception in 1969, Washington County Community College—originally Washington County Vocational Technical Institute—has been committed to teaching community members an array of technical trades. While it has since incorporated academic fields of study, the trades remain at the heart of the college. On September 15th, that relationship was celebrated with the grand opening of the newly renovated Howland Hall.

The building, which provides classroom space for heavy equipment, power sports, drafting, and related mechanical trades, was redesigned by Sealander Architects to include three new naturally-lit classrooms and an expanded 37’-tall bay to articulate equipment. The walls, windows, and heating system of the building were fully modernized for thermal efficiency, providing a comfortable temperature for aspiring students working in the winter seasons. Funds for the project were made available through a $1 million bond that passed in 2013.

For President Joseph Cassidy, the building represents the enduring legacy of the college—“a legacy based in trades but always looking to the future.”

The building is named for Harold F. Howland, who served as the college’s building and trades instructor from 1972-1977. Appropriately, three of Howland’s daughters—including Gayle Moholland, who now works at the college herself—were on hand to take part in the ribbon cutting ceremony.

A plaque bearing an inscription of Howland’s teaching philosophy was read before being brought to its permanent home inside the hall. “A skilled carpenter has the ability to create a thing of beauty,” part of the plaque reads. “It is also quite certain that nobody can leave any footprints in the sands of time if they go through life just sitting.”

“That was his life philosophy,” daughter Moholland recalls. “That’s the way I was raised, and that’s how he lived his life.”

For the incoming students of WCCC, the refurbished Howland Hall provides a welcoming, exciting space to explore their capabilities, create objects of beauty, and proceed to generate their own future legacies.