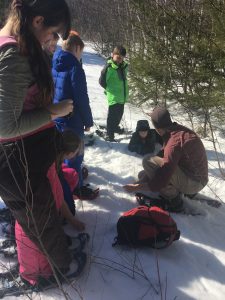 “We learned how to use the pizza and French fry techniques,” 12-year old Maggie said, describing skiing techniques that help to remind users of how to maneuver their skis when going up a steep hill or going downhill. Maggie also appreciated learning about woodcocks and their migration habits.

For 9-year old Autumn, the highlight was going snowshoeing at Moosehorn National Wildlife Refuge, where an ecologist taught them how to identify and follow different animal tracks. “I learned how to put on the different equipment for snowshoeing and skiing, too.”

For both Isaiah (12) and Jesse (9), the best part about the camp was being able to use the indoor rock wall during breaks between activities. Both describe themselves as “outdoorsy, sports-type people”, and the outdoor activities were enjoyable for them as well. Isaiah said that he found a new appreciation for skiing, which he said he was much more successful at than the first time he tried it in 2015. “I was bad at it, but now I’m pretty good.”

The camp was run by two senior students in the WCCC Adventure Recreation and Tourism program, Kayla Cater and Phil Atwood. Both consider the experience as valuable for learning how to conduct similar programs in the future. “The first day is always tough because you’re learning the personalities of the kids,” Cater said. “After the first day, we went back and changed everything on the itinerary because we saw how quickly they wanted to move from one activity to the next.”

“It’s a wonderful model, to use students as instructors for these camps,” Scott Fraser, Director of the Adventure Recreation program said. “It provides them with genuine leadership opportunities to apply the leadership theory that they’re learning in the classroom in a real world environment.”

Fraser said that the February camp and a similar one in December hosted a total of 22 individual children from the area, which he considers a fine success. “It is a really positive sign that there is interest for this type of programming in the community.” Fraser is planning additional camps for the coming seasons, including the continually expanding sailing camp and a new summer ecology camp. “We hope that through this outdoor programming that we’re really providing the connection between kids and their local natural environment.”