It didn’t take much for them to duck and run last week as buckets of ice were dumped on members of Washington County Community College’s faculty and staff. 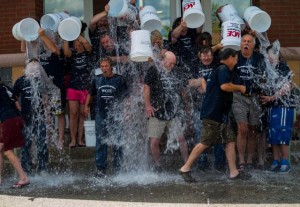 It was all part of the ALS Ice Bucket Challenge held last week across the nation. To date the ALS Association has raised more than $41 million in donations. The WCCC event was pulled together in just two days, yet the 20 faculty and staff members who participated raised nearly $200 on the day of the event with more coming in.

Four of the participants were new faculty members at the college and included: Randy McCormick, Diane Parsloe, George Chmielecki and Elizabeth Sullivan.

WCCC Academic Dean David Sousa, who participated, said it was a bone chilling experience. “It was shocking, I didn’t expect it to be quite so cold.

Sousa credited WCCC maintenance staff member’s Tab Davis and Mel Greenlaw for making the challenge happen. He said at first they had considered using a bucket loader filled with ice, but decided for safety reasons to stick with individual buckets.

According to the ALS Association, their mission is to provide care services to people diagnosed with amyotrophic lateral sclerosis, also known as Lou Gehrig’s Disease named after the legendary baseball player who was diagnosed with the disease.

“The ALS Association is the only national non-profit organization fighting Lou Gehrig’s Disease on every front.  By leading the way in global research, providing assistance for people with ALS through a nationwide network of chapters, coordinating multidisciplinary care through Certified Treatment Centers of Excellence, and fostering government partnerships,” the ALS Association web site said,

“I am very proud of the people who participated in this worthy fundraiser,” said WCCC President Joe Cassidy, who was one of the participants. “We did our part and I am proud to report, those we challenged did as well.