What does “community” mean in Washington County Community College? For some, it refers to the small, tight-knit nature of the student body, while to others, it speaks to the school’s connections within the greater Calais area. To some, including alumnus Michael Curtis, coming to WCCC brought him fully in to the community of Eastern Washington County automotive mechanics—a community soon to be enriched by his legacy.

Born and raised in Pembroke, Curtis always had an interest in working with his hands. “As a little kid I always liked taking things apart—though they didn’t always make it back together again,” Curtis recalls. “I was fascinated by how stuff worked.” His father ran a construction business that gave him opportunities to further explore mechanical function, and throughout high school he could regularly be found working on his car. 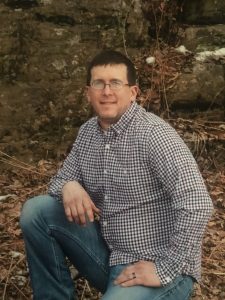 Upon graduating from high school, Curtis decided to pursue his interest at Embry-Riddle Aeronautical University in Florida. “I wanted to get away, to kind of find myself,” he said of the choice to leave Washington County. At Embry, however, Curtis was put off by the high percentage of book work required. “I didn’t want to sit behind a desk. I wanted to be more hands-on.” After successfully completing four semesters at Embry, Curtis returned to Pembroke and set his sights on a new goal: opening his own automotive repair business.

At the time, the automotive program at WCCC was in full swing under the guidance of Maurice Marden. “I wasn’t nervous, but there was a nervous anticipation,” he said of returning to college for his automotive degree. “I had heard so much about the teachers, but I wondered if I would get what I needed out of it to open my own business.”

As soon as his classes started, Curtis knew he was in the right place. “There’s no comparison in terms of the hands-on, one-on-one training, and the small classes at WCCC,” he said. “At Embry it was more book work. At WCCC you are focused on a goal and everything you work on, gets you closer to that goal.”

The instructors had a significant role in Curtis’s positive experience. “Being around the professional instructors, inspired me to excel,” he recalls. “You got to know the instructors one-on-one. I had relationships with all of them afterwards, including many that are still continuing.”

Once he finished his degree, Curtis immediately began opening his business. Within a short time, Curtis Service Center opened, and it soon began accumulating regular clients. Over its years of operation—during which time he serviced upwards of a thousand vehicles—Curtis would call his former instructors with questions, and he maintained a good-spirited competition with Ron O’Brien’s garage in Calais.

“I don’t think I would’ve been able to open my business without WCCC,” Curtis said.

In 2011, Curtis Service Center and its companion parts store, Curtis Parts Resource, were sold, becoming Hallowell Family Parts and Repair. Curtis himself continues to work in the same building as a technician. The commitment to excellence imparted to him at WCCC continues, demonstrated by his master level ASE certifications in cars as well as trucks. “[WCCC] drives you to be the best that you can be,” Curtis reflected.

With a son now coming of age, Curtis is pleased to share that he, too, will be going to WCCC for its automotive program. “He follows in my footsteps,” Curtis said. “Maybe we’ll open a business together someday. We’ll do it one year at a time.”

Given the opportunity to choose between a large school or a small local one, Curtis said, “You couldn’t get the same experience at a big school. WCCC made me a better person—not just better in my trade, but a better person to interact with…I’ve gone to a local school and a far-away school, and I really cherish my time at the community college.”