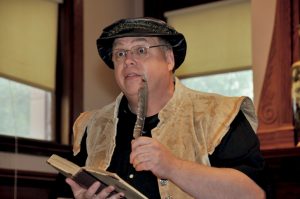 If you were to ask any random individual who the greatest writer of all time was, chances are they’ll mention William Shakespeare. Though deceased for exactly 400 years, Shakespeare continues to hold center stage as the most venerable author in the world. But why? And if his works were written over four centuries ago, why should we read them today? The answers to those questions will be provided in a witty and entertaining fashion at a presentation of the Zany Majestic Bard on October 4th at Washington County Community College. The presentation, to be conducted by David Greenham, is an educational theatrical experience open to public at no cost.

“Whether you are part of a workaday world, in retirement, or the most untutored schoolboy, you will find out that Shakespeare is indeed priceless and accessible for all,” reads a quote from the event’s website at the Maine Humanities Council. The impact of Shakespeare can’t be understated: in that single sentence, six of the words used—workaday, retirement, untutored, schoolboy, priceless and accessible—were all invented by Shakespeare, along with 1,700 other commonly used words!

While part of the goal of the program is to illuminate Shakespeare’s contributions to our language, it is also intended to broaden his appeal by demonstrating exactly how witty and playful his writings often were. With a distinguished theatrical background, including 14 years as the artistic director at the Theater at Monmouth (the Shakespearean Theater of Maine), Greenham is perfectly suited to the task.

The Zany, Majestic Bard was developed earlier this year by the Maine Humanities Council in honor of the 400th anniversary of Shakespeare’s death. Greenham pledged to perform the presentation at interested libraries around the state, prompting WCCC Library Director Elizabeth Phillips—herself an avid Shakespeare fan—to contact him.

“He knew how to write to his audience,” Phillips said. “People can get meaning that applies to their own lives from his plays.” She explained that his plays include timeless themes that people struggle with, such as prejudice, and added that they provide a window into history. “It creates an interest in that era.”

The presentation will be held in the auditorium in St. Croix Hall at WCCC on Tuesday, October 4th at 6:00 pm. There is no charge for the event and no registration is required. Greenham will be conducting a workshop at Calais High School the following day for students participating in Alice Wilkinson’s English class.