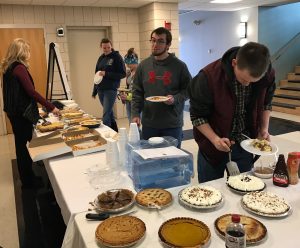 The staff and faculty of Washington County Community College rallied to create a memorable event on campus with the first annual Pi(e) day. Initially planned to be held on March 14th in honor of the ratio of a circle’s circumference to its diameter, abbreviated as 3.14, the event was postponed to the 15th due to weather.

A variety of savory and sweet pies was available for students and guests to enjoy. Nine kinds of savory pies – most made by hand – were presented, including spaghetti pie, chicken pot pie, spanakopita, and vegan and gluten-free tamale pie. Seven kinds of sweet pies, including pumpkin, squash, vanilla caramel, and blueberry, were also on hand, along with ice cream and toppings for those who wished to get the most out of their desserts.

Students were delighted with the event. “This is really awesome,” said Christina Eals upon arriving at the pie spread. “It makes me feel really good to see all of it.” Eals said the event and the small campus in general combined to create a welcoming atmosphere. “I feel completely feel at home here.”

Pi(e) day was the idea of Human Services program director Elizabeth Sullivan. “I’m a fan of Pi Day and it’s something to celebrate with friends,” Sullivan said. “I thought that hosting a WCCC Pi(e) Day would be a fun way to get students together for a community lunch.” Sullivan hopes to make it an annual event at the college.

Pi is a concept that gets mathematically-minded individuals excited as a result of its constancy – no matter the size of the circle, the formula to find pi is always the same. Pi is also somewhat ambiguous in that is usually rounded to 3.14 or represented by a simple symbol, π, rather than expressed in its full form. Attempts to fully express pi are now the subject of world records. In 2013, pi was expressed to 12.1 trillion digits by Alexander J. Yee & Shigeru Kondo, and in 2015 Rajveer Meena of India accurately recalled the first 70,000 numbers in pi while blindfolded over 10 hours.

In 2009, the US House of Representatives supported the official designation of March 14th as Pi Day – a day that, with any luck, will be hereafter all the more delicious at WCCC.