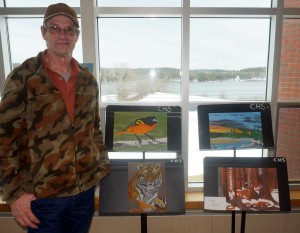 Guests from around the area came to Washington County Community College on Wednesday, March 23rd to partake in an art exhibit that included dozens of pieces as well as a magnificent meal prepared by students of the Culinary Arts program. Students, staff, and faculty brought in art from a variety of media that they themselves created as well as favorite pieces from their private collections. This year’s exhibit featured the artwork of the students of the Mixed Media Art Workshop class taught by Karryann Nadeau, part of the college’s senior program.

This is the third consecutive year of the art show, which is organized by the TRIO department of WCCC. “Part of our mission is to expose students to cultural events, and so we decided to create one,” TRIO Director Gayle Moholland explained. “It’s also a great way to welcome spring and bring back color and sunshine after winter.” Each event tends to draw in about seventy five attendees, including artists and their family members.

The senior program has been a tremendous success at the college, with many participants attending each of the offered classes, including history, literature, and art. The compound effect of exposing students to different fields has been effective in broadening their horizons. Gregory Holst, who describes himself as having been a heavy equipment operator all his life said, “I never used to think I had any artistic capability.” Holst has been so taken with the painting process that he now spends most of his time painting rather than working on his wood burning projects. He brought in several recently completed paintings of wildlife to share.

“We’re all addicted,” fellow classmate Pat Wyeth agreed. Wyeth is an experienced textile worker who has enjoyed exploring painting techniques and the prospect of combining the two art forms. She brought in a quilt she made in a separate class using the method introduced by the African American women of Gee’s Bend in Alabama. With it, she included their story—the women would make quilts from leftover scraps of cloth, creating elaborate and unique patterns every time. In doing so, they have lifted their community out of poverty.

Among the senior students that have taken the free courses from the college, several of them have formed a group that meets on a weekly basis to share and discuss what they have learned. Named “Shades of Gray”, the club meets at the Methodist Homes each Friday.

Attendees to this year’s art exhibit were treated to cheese lasagna as well as first-class hor d’oeuvres, including black olive crostini, tomatoes stuffed with mozzarella, and a chocolate fondue dipping sauce with an array of fruits and breads to accompany it.

“It’s a great event to show off the talents of our students as well as other members of the community,”Tina Erskine, Director of Human Resources, Development, and Communications for WCCC said of the exhibit.