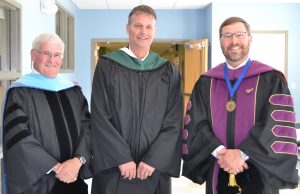 A graduation ceremony may seem like an unusual place to talk about the importance of failure, but the students and their guests at Washington County Community College’s 49th commencement ceremony on Friday, May 18th had the opportunity to learn valuable lessons about the rewards of being challenged, failing, and choosing to continue moving forward. The 136 students receiving either a diploma or a certificate on Friday heard from multiple speakers that spoke passionately about powerful life lessons before embarking on the next step of their own lives.

In WCCC tradition, the graduates were led from the college to the gymnasium of Calais Middle High School by bagpiper Ernie Smith. Upon arrival, they were met with an honor song played with robust vigor by a trio of Passamaquoddy drummers. College President Joseph Cassidy welcomed those in attendance and recognized that the college – which consistently ranks among the top ten percent of community colleges in the country – is truly comprised of three nations: The United States, Canada, and the Passamaquoddy.

After President Cassidy expressed his pleasure with the graduating student body and their kindness to one another and commitment to their schooling, he invited Dr. Bill Cassidy to speak on behalf of the Maine Community College System. Dr. Cassidy said that graduation represented “an accomplishment that reaffirms that Maine people are willing to work hard for their dreams” and implored to the students that they either remain or return to the county and the state to give back to their communities.

This year’s student speaker was Tammy Cox, who had previously been named Student of the Year. In what President Cassidy referred to as “one of the best student speeches I’ve heard,” Cox spoke emphatically about some of the wisdom she has gained and what each graduating student has gained in turn. She expressed that the degree does not guarantee success or happiness, but that the “grit, determination, persistence, and tenacity” taught at WCCC is a major factor in both elements. “Use this. Use this with everything you have. Use it when things are going right and use it twice as hard when life has smacked you down,” Cox said.

Cox urged those present to not be deterred by the failures they experience, and to instead view them as opportunities. “Looking back, I can tell you with 100 percent certainty that some of the greatest things I have gotten out of life have come from my darkest times. These failures have strengthened me and softened me. They have caused me to be determined and headstrong in the face of adversity. They have shown me how to be empathetic and caring to people around me. But perhaps most importantly they have pushed me to figure out who I am and to love that person with all her talents and many, many faults. It is this mindset, this relationship you have with yourself that allows you to succeed even if you have failed.”

Commencement speaker Larry Barker, President and CEO of Machias Savings Bank, shared similar sentiments. Barker said that over the course of his career – the secret to success has always been hard work – he has learned valuable lessons about balancing. One lesson is that while hard work is important, it’s also important to not work so hard as to not have a life. He advised to “be bold and take action” – but said that doing so comes with risks, so “you also may want to consider keeping it simple.” He provided his perspective on how he would have prioritized things differently, given the opportunity. “If I had it to do over again, I’d spend more time working on me and less time working to make a dollar.” As a means for self-improvement, Barker said that with access to Google there is no excuse for not learning what you would like to learn. He further impressed that he thinks of his family – including an adopted child from Portland that was born addicted to Oxycontin and heroin but is now thriving at the age of 6 – is his greatest accomplishment.

Barker echoed the theme of embracing failure, citing a children’s clothing store that he and his wife opened that resulted in a $25,000 debt. “For the record, failure wasn’t nearly as bad as I’d always feared it might be,” he said. Describing how he had learned that “failure wasn’t fatal,” Barker said the experience freed him to pursue his goals without hesitation. “That $25,000 I lost turned out to be a great investment in my education, my confidence, and my experience.”

With their diplomas and certificates in hand and sound advice ringing in their ears, the 2018 graduates of WCCC celebrated their shared milestone with a raucous cheer at the end of the ceremony.