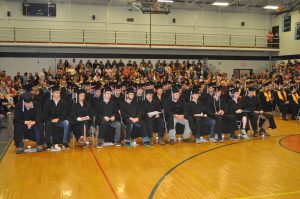 The sun emerged after days of rain to grace the procession of Washington County Community College graduates as they walked from the college to the auditorium at Calais High School. The shifting weather appropriately accompanied the ceremony’s repeated theme of embracing change, a message that resounded in each of the speeches delivered to the graduates.

“If you know where you’re going, that’s wonderful, but if not, I urge you not to worry,” said mathematics instructor Darin McGaw during the distinguished faculty address. McGaw spoke about how he had enlisted in the Navy before he had graduated high school, but the Navy sent him to college – “a place that I didn’t think I wanted to be. Little did I know at the time, the Navy did me a great service.”

At times, McGaw thought he would be a stock broker, an air traffic controller, a game warden, or a lawyer. He took steps towards each of those goals, but never really got to them for one reason or another. “I got a higher education despite myself, and it opened up more doors than I could have imagined.” One of the doors opened after McGaw completed his master’s degree in mathematics was to become a teacher at WCCC. “This was the place I was going all along… of all the places I’ve been, WCCC is one of the best.”

Student of the Year Jaycie MacArthur also spoke on the importance of embracing change, which she referred to as “the only constant in our life.” MacArthur shared a personal story from when she was just ten years old. She and her father would often go fishing as soon as the ice came out of the lakes, and they had made plans to do so. On the day they had been planning to go, it was raining, and her father convinced her they should stay home. The next day was sunny and beautiful and they headed to Monroe Lake. Her father said the roads might be washed out due to rain and asked if she would rather fish in a stream along the way. She was determined, though, to catch the biggest fish in the lake.

When they got to the lake and had paddled out a distance in their canoe, they heard a faint cry for help. They paddled furiously towards it, finding a capsized aluminum boat and two older gentlemen desperately clinging to it in the frigid water. MacArthur and her father threw a rope to the two men and pulled them back to shore. Once there, her father drove off to try to find a phone signal as young MacArthur labored to help the men up the steep bank. “It was a definite struggle, but they made it up.” The two men, Tom and Bob, later said that they were certain they would not have made it out of the freezing lake as neither of them knew how to swim. “All things happen for a reason,” MacArthur said, echoing the words her mother told her that day. “It was all meant to be.

“Sometimes things just don’t go as planned,” MacArthur concluded. “Stay open minded. Learn to accept that some things in this life are meant to happen for a reason.”

Wayne Jackson, an alumnus of WCCC, was the keynote speaker at the graduation. Jackson spoke on the number of changes that had happened since he was a student at WCCC in 1984, including cell phones, internet, Facebook, Twitter, Snapchat, and selfies. “In this constant changing world we live in, one thing will never change: the need to have goals and dreams to be successful,” Jackson said.

“Whatever your dreams may be, it’s ok if they are constantly changing. As you grow, and you become more active in society, things will change. Your goals and dreams today will look much different a year from now or in thirty years.” Jackson said that there will be times where we need to go outside our comfort zones to accomplish our goals or fulfill our dreams. “Don’t be scared. If you’re afraid to challenge yourself you’ll never get to your true potential.”

After graduating decades ago, Jackson himself stepped outside his comfort zone to found Jackson Plumbing and Heating in Old Town. Jackson describes the first three years as “very scary”, but said that after 35 years his company achieved an annual gross profit of nearly $2 million. “My goal has changed again,” he said, describing how he now hopes to retire within five years to spend time with his grandchildren.

“When you walk out of here today, embrace change,” Jackson said. “Don’t fear it. This world is changing faster than ever. Put your dreams into motion. Set your goals. Dream big. The sky is the limit.”