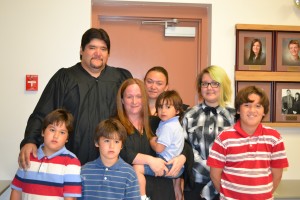 Graduates Michael and Siobhan LaCoote and their children

Graduates of the 2015 class at Washington County Community College had a unique opportunity to listen to the powerful words of one of the Maine Army National Guard’s top women officers during commencement exercises on Friday, May 15, 2015.

WCCC Academic Dean Alex Clifford, a member of the Maine Army National Guard and a colleague of the military woman, introduced Col. Diane L. (Meserve) Dunn, the first woman to serve as Brigade Commander of the 120th Regional Support Group of the Maine Army National Guard in Bangor.  She offered this year’s commencement address. Dunn is a graduate of Houghton College, where she earned a Bachelor of Arts in Psychology in 1988.

During her distinguished military career, Dunn served in numerous capacities, including commanding the 286th Combat Service Support Battalion from 2007 until 2010. During her tenure as a battalion commander, she was mobilized and commanded Task Force Dirigo, which conducted sustainment operations for coalition forces in Regional Command South, Kandahar, Afghanistan from January through December 2009.

In addition to her career as an Army officer, she has been a small business owner.

Dunn, said this was her first commencement address and she talked about perseverance. She told the students that as they stepped into the work world they should be challenged to make a difference, not just a living.

Ceremonies began Friday morning with the arrival of students, faculty and staff at the Calais High School gymnasium.  Ernie Smith, dressed in a traditional Scottish outfit, played the bagpipe and escorted them in. They were greeted by family members and friends who stood and applauded them. WCCC President Joe Cassidy welcomed everyone and told the students that the day belonged to them. “This day is about hard work and success,” he said.

Cassidy then introduced Maine Community College Systems Trustee Robert Clark. Clark is executive director of Northern Maine Development Corporation. He congratulated the students on reaching their educational goals. He reminded them that the diplomas they were about to receive were a symbol of their success.

Student Senate President Victoria Webber then introduced this year’s Distinguished Faculty Member, Ron O’Brien, Technology Department chairman and instructor of the college’s Automotive Technology Department.  The popular instructor offered the students some well-honed advice including maintaining a solid work ethic and urged them to not only be proud of their accomplishments, but to do it humbly. “Enjoy your career, but most of all be happy,” he said.

This year’s student of the year, Alana-Marie Pulkkinen, is a graduate of the college’s Adventure Recreation and Tourism program.  She has been accepted into the summer program at the Margaret Chase Smith Policy Center Leadership Summer Institutes. “That is very difficult to get into,” Cassidy told the audience.

Pulkkinen enrolled at WCCC in the fall of 2013 as a candidate for the Associate in Applied Science degree in Adventure Recreation and Tourism.  She is presently a double major taking Criminal Justice courses to augment her Adventure Rec program curriculum.

“Alana is the type of student that a teacher gets to work with only once in a great while,” her instructor Scott Fraser said recently. “She’s the student who challenges you to be the best teacher you can be, the one that you look forward to helping reach her potential, and the one from whom you learn as much as you hope she learns from you.”

She is a member of Phi Theta Kappa, Student Senate, Polar Bear Dip, TRiO, and frequently volunteers to help with Residential Life with student engagement activities.

In addition to her on campus jobs, she is an active member of Calais Fire EMS.  For the past six years, Alana, who has a family member impacted by Multiple Sclerosis, has participated in fundraising events for the Multiple Sclerosis Association.  She is one of a 10-member family team at the annual MS Walk in Lewiston each year.  Her hope is to contribute in some small way toward the fight to find a cure for MS.

Eventually, Alana hopes to work for the Maine Game Warden Service. She has applied to Unity College this fall and hopes to obtain her Bachelor’s degree in Conservation Law.  She is the recipient of a Unity merit scholarship for $10,000 due to her outstanding academic performance at WCCC.

When she is not in school, she enjoys working on vehicles.  This is something she has always loved and is a skill she says, “She just picked up on her own.”  She is passionate about the outdoors and enjoys hunting and fishing.

Alana talked about the many health challenges she faced that interrupted her educational goals. She reminded the students that obstacles can challenge them in life, but said that those obstacles should not stop them as they pursue their goals.