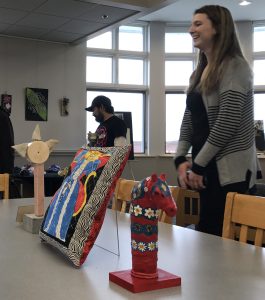 The artwork of the students of the mixed media art class held over the spring semester had their art displayed during an exhibit held in Washington County Community College’s library. Dozens of pieces of art were on display for the exhibit, including pieces done in stone, pastel, paint, metal, and cloth.

“The goal was to encourage students to find their own practice,” explained instructor KarryAnn Nadeau. The mixed media class was a 200-level course, enabling students to experiment with and explore a variety of techniques and materials.

The class comprised of seven students, two of whom – Pat Wyeth and Tim Kasel – had taken it before. Wyeth is among the Wyeth family of artists who have called Maine home in the past. Ten of her pieces were featured in the exhibit, along with seven from her husband, Tim.

The students came from a mixture of backgrounds and were a range of ages, but Nadeau used her background in art leadership and art therapy to draw out the individual talents of each student. Nadeau said that she often gets aspiring teachers in her classes, and she tells them that they need to get comfortable working in some kind of art material. “Whatever topic you were hired to teach, nowadays in America you may also wind up teaching art,” Nadeau explained. She added that teachers are on stage every day and that through social media they market themselves as professionals. Have an artistic background can enable a more cohesive presentation.

For student Eben Slicer, who has focused his studies in computer technology, the class opened up some new perspectives. Slicer took an introductory art class in the previous semester. “This was different, it was more of a ‘at our own pace’ type of class. It was definitely interesting to see the difference between just drawing and mixed media, when you add a whole bunch of new materials into your art.” Slicer plans to continue to “dibble and dabble” in the future.

All of the students that participated created a mask that they then decorated in their chosen fashion. Nadeau expressed that unlike masks used for hiding one’s identity, the creation of these masks enabled students to reveal themselves.

Several of the frames used during the show were purchased at a significantly discounted rate from Timeless Reflections in Calais. Nadeau expresses her thanks to the business for their generosity.