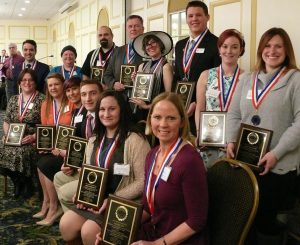 Of the many hard-working students at Washington County Community College, two have risen to the top of the list to distinguish themselves as members of the All-Maine Academic Team. Rachael Cox, an Eastport-based student in the Human Services program, and Leigh-Ann Hanson, a Calais resident in the Business Management program, were formally recognized for their achievements by the Maine Community College System at a banquet in Augusta on March 22nd.

The All-Maine Academic Team is selected annually from each of the seven colleges within the Maine Community College System. Members are selected based on their academic ability, their community spirit, and their leadership. Each of the fourteen people named to the team receives a $500 scholarship.

For both Cox and Hanson, WCCC is the first and arguably most important stage in moving towards their educational goals. Both students speak favorably of the school’s support system and in particular the instructors that have reached out to ensure their education has been successful in all respects.

“I would definitely recommend WCCC to everyone because it is a wonderful school that really focuses and emphasizes self-improvement both academically and personally,” Hanson said. Hanson is nearly finished with her Business Management degree; she intends to return to WCCC in the fall to complete her Liberal Studies degree before transferring on to the University of Maine at Machias next year to complete her BS in Accounting. “All of my instructors have been extremely supportive,” Hanson said. Two instructors in particular – Bill Case and Rhonda French – have been most helpful to her. “Both have taught me the importance of hard work, asking for help and thinking outside the box and helping others.”

Cox has similarly been elevated in her confidence and her capability by her instructors, she shares. She refers to her advisor, Elizabeth Sullivan, as a great inspiration. “Liz doesn’t just teach Human Services, she lives it.  She is a truly gifted instructor but it’s her life example that teaches her students the most.” Cox said that Sullivan actively teaches students to be involved in their communities. “I cannot understate how much her support and encourage have meant to me personally these last two years.” Cox plans to obtain her master’s degree before becoming a professional drug and addiction counselor. For Cox, WCCC has not only been a place of growth for her, but her son Ray has also flourished there as well. “It’s a wonderful place to go to school and definitely helps propel students to the next level, whether it’s a job or further education.”