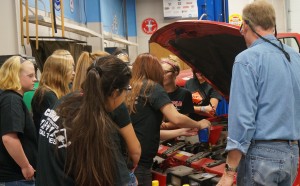 WCCC Automotive Instructor Ron O’Brien provided the girls that attended his workshop some of the basics of automotive maintenance.

Just a few decades ago, if you were a female student in high school with an interest in shop class, you were out of luck. Home economics was widely presented as the only acceptable option for young girls to take. In the modern era, however, that’s no longer that case—and some colleges, including Washington County Community College, are working to specifically attract women to their technical courses. WCCC hosted its annual Totally Trades event on Friday, October 23rd, giving 150 young women from 19 area schools the opportunity to try their capable hands at trades that have traditionally excluded them.

The conference began with a speech from keynote speaker Joyce Maker, who climbed upward from her position as a clerical worker at WCCC to take a leading position on several local and state committees, including the Maine State Senate. Maker said that though females have made significant strides in recent decades, some would argue that we are moving backwards.

“Instagram, Twitter, Facebook—they all bombard you with images of women whose fortune and success came from their appearance. But for each one of these posts, there is another: one that shows women dominating in every athletic discipline, holding political office, or standing at the head of a boardroom.” Maker said that women are gaining ground in education in particular, with sixty percent of all masters degrees awarded to women. “First, you have to take that first step. Today is the day to do so—don’t be afraid to take it!”

After the keynote address, students broke off into groups headed for one of fourteen trade-specific workshops. The choices included traditional blacksmithing, wherein participants heated and hammered their own s-hooks into creation, birdhouse construction, pipe soldering, computer deconstruction and reassembly, computer-aided drafting, digital video production, small engine repair, criminal justice, becoming a firefighter, being in the legislature, and heavy equipment operation.

Students approached the workshops with enthusiasm, with most of them having little or no familiarity with the tasks at hand. After the first workshop was completed, the students reconvened for a brief lunch before heading back out for a second workshop of their choosing. The completion of the second workshop signaled for the opportunity to again regroup and share what they had learned with their peers.

The Totally Trades conference is put on by New Ventures Maine (formerly Women, Work, and Community) as part of its focus on improving the economic wellbeing of Maine families. It is offered at no cost through funds provided by WCCC, the Maine Community Foundation, and other local organizations.