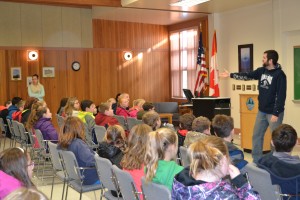 Workshop presenter, Chris Woodside speaks to the students about bullying and how harmful it can be.

Recognizing that one of the most effective methods of teaching is hands-on learning, Washington County Community College’s Supervisory Management class is tasked each semester with the fulfillment of service learning projects. Each project is community-oriented, and the impact of its completion is often profound.

This semester’s class focused on three projects designed to benefit youth and families in the local area. One project saw students offering gift-wrapping by donation at Crumbs during the downtown Moonlight Madness event in downtown Calais, with all donations being given to a local charity to help families in need of heating assistance. Another involved an anti-bullying presentation given to the fifth and sixth graders of Calais Elementary School to raise awareness of the impact of bullying and what can be done to prevent it. The third project gave the faculty and staff of WCCC with children the opportunity to participate in a Family Fun night, a carnival-like event that included games and a piñata.

“We’ve all seen the effects of bullies, and some of us have experienced it personally,” team leader John said of the anti-bullying project. “Our goal was to get through to at least one person—to show them that they can make a difference.”

The projects are selected by students four weeks into the semester, with each student bringing in three ideas suitable for a group of four to five students to complete within a month’s time. The ideas are voted upon by the class, and then students are divided into three groups. A team leader is then chosen.

“At that point, I back out and it becomes their project,” instructor Rhonda French explains. The success or failure of the project is entirely based on the input of the students from that point forward. “I’m there if they need assistance, but for the most part, students totally plan and implement the projects themselves.”

By participating in the various projects, students gain experience leading, working with different personalities, dealing with conflict, working on a limited budget, and implementing contingency plans as needed. After the projects are completed, each student writes a paper that gives them the opportunity to reflect on what they have learned.

Some past projects have been particularly far-reaching. Last year, one group of students completed “Soles for Life”, a project designed to collect shoes for children and villagers in Tanzania. Shoes in Tanzania are highly valued; children without shoes cannot attend school and not having shoes presents a significant risk of infection and disease. After collecting several boxes of shoes from the local community, the students were dismayed to find out that the cost of shipping just two boxes to Africa was $400. Working within the budget constraints of the project, the students deliberated over which shoes would be best, narrowing it down to those that were most durable.

“With many of donation projects, it’s hard to know if the donations ever arrive,” French commented. However, within a few weeks of sending the shoes, the students received photos back from a woman in the village showing the shoes being handed out and worn with clearly evident delight. “It was so touching and rewarding. It made it all real. It was such a learning experience for the students, and for me, too.”