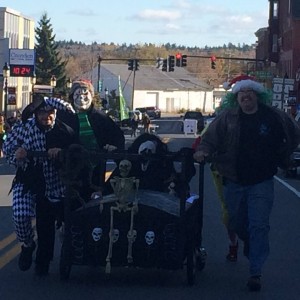 Enthusiasm goes a long way in creating success, and that concept is one that is frequently embraced by the students of Washington County Community College and its faculty and staff. This year’s Halloween season has been filled with a variety of community and on-campus activities that have provided the perfect opportunity to get in the spirit of things—one that many students have wholehearted jumped on.

The first annual casket race of Black Magic Saturday was won by costumed runners from the Student Senate pushing a superbly-crafted casket constructed by the building trades and welding departments. For their willingness to participate, the team was awarded with a total of $600, to be divided between the three contributing groups.

The senate was joined by other volunteers from the college at the first annual haunted house at the old high school at the corner of Washington and Church Streets, put on by the Calais Fire Department. Students volunteered at all three showings of the haunted house to assist in terrifying 240 visitors at what is sure to be an annual favorite for the community.

Back on campus, this year marked the occasion of the second annual Murder Mystery event. The evening was fully catered by the culinary students of the college, under the helm of Diane Parsloe. The students prepared a multiple course meal along with a fantastically atmospheric dining area in the Renaud Room for a total of twenty six guests.

This year’s event featured a pirate theme, encouraging the thirteen cast members and guests to dress up in their finest seaworthy attire. The courses were all appropriately thematic, including pumpkin turkey chili, “yummy mummy” mini hot dogs, panna cotta “brains”, and “broken glass” cupcakes with edible glass. Student Anna Dill won the best-dressed prize for her role as One-Eyed Wanda while Stephen Hand was awarded for being the best actor—a point emphasized by his acquisition of $2,700 of the available $6,000 in pirate money.

On the 30th, a Halloween party in the dormitories was attended by several seasonally-garbed students, rounding out a solid month of activities well-enjoyed by participants and observers alike.