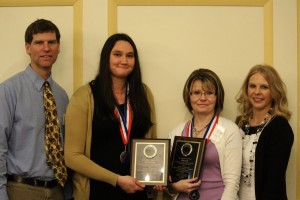 Two distinguished women have joined the All-Maine Academic Team for their outstanding efforts at Washington County Community College. Heidi Look of the Medical Assisting program and Chloe Wiebe of the Adventure Recreation program were each honored at a banquet held in Augusta on March 23rd, joining twelve other students from the Maine Community College System.

“It is an honor to be part of the All-Maine Academic Team!” Look enthused. A non-traditional student from East Machias, Look describes her initial trepidation toward coming back to school. “After 13 years away from school, I was nervous and had doubts of being able to further my education.” However, once she began attending classes, her confidence soared. “The teachers and staff at WCCC offered tremendous support and my doubts of furthering my education was turned into reality.”

Look was recognized for her academic prowess with numerous scholarships and soon became a part of the Phi Theta Kappa honor society, which sponsors the All-Maine Academic Team. She aspires to join the upcoming nursing program at WCCC to become an RN so that she may work in a trauma center or emergency room.

Wiebe also found significant support at WCCC. “WCCC is over the top when it comes to supporting individual students in accomplishing their goals,” she said. A resident of St. Stephen, Wiebe entered the Adventure Recreation program to further her desire to become a wilderness therapist. “The Adventure Recreation and Tourism program is exceptional in its ability to introduce students to a variety of outdoors skills, and I would recommend it to anyone interested in working in the outdoors or wanting to become a more confident leader.” Wiebe was granted the Outstanding Achievement award by WCCC last year for her exceptional performance in the program.

Once she completes her degree at WCCC, Wiebe will be returning to Canadian Mennonite University to gain a degree in Peace and Conflict, thereby combining her wilderness expertise with a profound humanitarian understanding. “There is great value in furthering your education weather you feel that you are an academic or not,” she professes.

Both students have received a $500 scholarship from Phi Theta Kappa as part of the honor of being named to the All-Maine Academic Team.