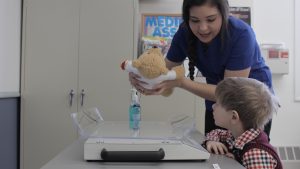 More than 60 pre-school age children were delighted on Thursday, March 23rd when they went on an adventure to Washington County Community College and each received a teddy bear—teddy bears that were all given a clean bill of health by the college’s Medical Assisting students. The occasion was the annual Teddy Bear Clinic, an event coordinated by both the Medical Assisting program and the Early Childhood Education program.

“This is an opportunity for children to see and touch medical equipment and care for their teddy bears that are receiving vaccinations, being weighed and measured, having their blood drawn and blood pressure taken,” explained Medical Assisting program director Cindy Moholland. During the “office visit”, the medical students treated the bears as the patients and the children as the caregivers.

“My bear loves getting shots!” said one excited young boy. Another child kissed the band aid applied to his bear after it was given a shot.

“I think the kids had fun getting their bears checked out,” said Early Childhood Education student Erin Cyr. Cyr, who hopes to work in a daycare after she graduates in May, enjoyed assisting the children and handed out certificates that bore the names children chose for their bears. “Most of them couldn’t think of names yet but we left them blank for later.”

“This was a great hands-on opportunity for the WCCC students who plan and execute the event,” Moholland said. “For the medical assisting students, it was a chance to practice interacting with children and explaining medical procedures in terms that young children will understand.”

The teddy bear clinic will return again in spring of next year. 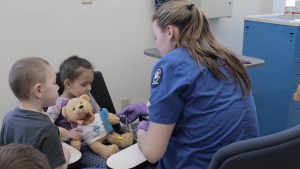 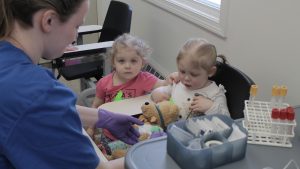